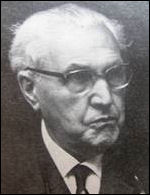 In 1906, after finishing primary school in Kamianske, Lisowskyj enrolled in the M.V. Hohol School of Applied and Decorative Arts in Myrhorod where he studied for two and a half years. He subsequently continued his education, until 1917, at the Kyiv Art College. His paintings and graphic art works were displayed for the first time at an exhibition in Nizhyn and at a presentation by the Persten group of young artists in Kyiv (1913). In 1914 his works were featured at an exhibition organised by the Society of Kyiv Artists. He produced book artwork for the Siaivo, Grunt, Vernyhora and Flamingo publishing houses in Kyiv, and collaborated with the Molodyi Teatr theatre group led by Les Kurbas and with the Muzaget group of modernists. From October 1917 to May 1920 he studied at the Ukrainian State Academy of Arts, initially in the department of monumentalist art run by Mykhailo Boichuk, and later in the department of graphics led by Heorhii Narbut. He created in the Ukrainian national style whose renascence was initiated by Narbut and Vasyl Krychevskyi. In 1920, as a representative of the Academy’s student council, he was arrested by the Bolsheviks and imprisoned for several months. After a second arrest he escaped while under escort and crossed the border into Poland.

In 1921-23 Lisowskyj lived in Warsaw where he worked on the design of currency (one coin designed by him entered into circulation). In 1923 he moved to Lviv, where he became a member of the Group of Activists of Ukrainian Art and was elected its treasurer. Between 1923 and 1927 he produced many book covers, bookplates and various other works of graphic and applied art, decorated churches in various places in Galicia, and worked on an inventory of ancient icons. In the mid-1920s he taught drawing and painting at a teacher training college in Lviv. He designed the gravestone of the political activist Olha Basarab in Lviv – and subsequently also of the nationalist leader Yevhen Konovalets (Rotterdam), Danylo Skoropadskyj (London) and others.

From 1927, with a grant from the Ukrainian Scientific Institute in Berlin, he studied for two years at the Berlin State School of Fine Arts. In 1929 he obtained a degree covering the subjects of decorative art, text design and the techniques of book graphics, book printing, printing on stone and copper, and drawing. He audited lectures on the history of art at the Ukrainian Scientific Institute, and also attended the State Academy of Music. In around 1929 he won a competition for the re-design of the logo of the German airline Lufthansa, which is still in use.

In 1929 Lisowskyj was apppointed head of the department of graphics at the Ukrainian Studio of Plastic Arts in Prague, where he worked until 1945. He was a member of the Ukrainian Society of Bibliophiles, and also an active member of the Plast Ukrainian Scouting Organisation. From December 1934 to 1939 he was the commandant of the Czechoslovakia-based section of the organisation (Soiuz Ukrainskykh Plastuniv-Emihrantiv). He refined the design of the Plast emblem (fleur-de-lys interwoven with the trident) and designed various badges, anniversary stamps and other insignia for the organisation. He became close to the circle of members of the Ukrainian Military Organisation and, subsequently, of the OUN, and designed the OUN emblem which was adopted in 1932 (composition based on the trident). He also produced graphic designs for various books including Maria and Hory hovoriat (The Mountains Speak) by Ulas Samchuk, Vezhi (Towers) by Oleh Olzhych, Istoriia ukrainskoi literatury (History of Ukrainian Literature) by Dmytro Chyzhevskyi and Mykola Hnatyshak, and Ukrainski baliady (Ukrainian Ballads) by Leonid Poltava. While living in Prague he maintained contacts with leading figures in the arts in Lviv and, as a member of the Lviv-based Association of Independent Ukrainian Artists, took part in its exhibitions. On behalf of the Ukrainian Scientific Institute in Berlin he organised two exhibitions of modern Ukrainian graphics outside Czechoslovakia: in February 1933 at the Berlin Art Library (at which 42 of his own works were displayed), and in 1938 in Rome, where he also organised an exhibition of Ukrainian maps in connection with the International Geographical Congress held in Amsterdam that year. During this period he also published an article containing reminiscences about Heorhii Narbut (1930), a biography of Petro Kholodnyi (1932) and an article on Taras Shevchenko as a painter (1941). In late 1938 he became a full member of the Ukrainian Research Institute in America (European branch), which was active in 1938-39.

After the end of the Second World War, with the assistance of the International Refugee Organisation, Lisowskyj left for Italy where he initially he stayed in a displaced persons camp at Jesi, near Ancona. Later, with the help of Bishop Ivan Buchko of the Ukrainian Greek Catholic Church, he moved to Rome. In 1950, as part of the International Exhibition of Sacred Art at the Vatican, he organised a Ukrainian stand for which he produced decorative murals.

In December 1951, at the invitation of the Association of Ukrainians in Great Britain (AUGB), Lisowskyj moved to London where he lived for almost 25 years. After initially being employed in a confectionery factory, in 1953 he began to work in the organisational department of the AUGB Head Office in London. From March 1963 to July 1969 he was president of the Association, remaining an employee of the Head Office until the spring of 1965. In February 1963 he became head of the newly-formed Curatorial Board of the AUGB-affiliated Taras Shevchenko Library and Museum (now the Shevchenko Library and Archive) and remained in this position until 1976. In 1963-64 he headed the Shevchenko Centenary Committee in Great Britain (formed for the purpose of organising the commemoration in Great Britain of the centenary of Shevchenko’s death and the 150th anniversary of his birth).

In August 1976 Lisowskyj emigrated to Geneva where he lived with his daughter, Zoia Nyzhankivskyi, and her family, until his death.