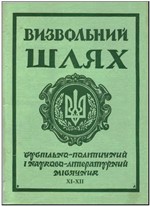 The journal was first published in January 1948 by the UK leadership of the OUN(B) and was initially intended only for OUN(B) members and supporters. Until mid-1950 it was reproduced manually using a duplicating machine. The first few issues were produced at a camp in the vicinity of Sherburn in Elmet, near Selby in Yorkshire, which housed former officers of the Galicia Division, and subsequently the journal was printed in London.

From May 1950 the journal was typeset and printed more professionally, and it began to be distributed within the Ukrainian community at large. From the spring of 1951 it was officially published by Ukrainian Publishers Limited (UPL). In 1954 the number of pages in the journal was increased from 48 to 112 (128 from 1955). In the same year it became an official mouthpiece of the central OUN(B) leadership, and the number of readers in other countries of the Ukrainian diaspora subsequently increased.

The journal contained articles on ideology, history, cultural, church-related and other topics, documents pertaining to the dissident movement in Soviet Ukraine, Ukrainian literary works, translations of literature from other languages, literary criticism, etc. Articles for the journal were written by authors from the UK and other countries. With the establishment of Ukrainian independence in 1991 the number of contributors from Ukraine increased significantly. From 1993 the journal was published by the Ukrainian Information Service (UIS), with which UPL merged in that year.