Great Britain [Велика Британія] – the largest island of the British Isles, on which the mainlands of England, Scotland and Wales are located. 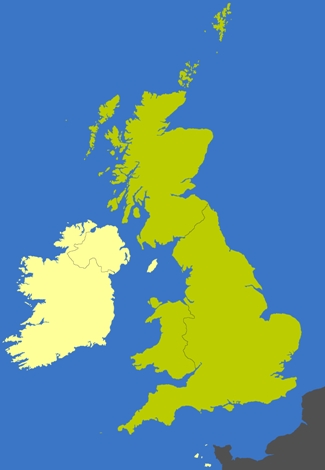 The term Great Britain is also used in a political sense to denote, as an entity, the countries of England, Scotland and Wales (including their offshore islands), which together constitute part of the United Kingdom of Great Britain and Northern Ireland.

The name Britain derives from the Latin Britannia, the name used by the Romans for their province which covered most of the island of Great Britain, previously known as Albion. In the Middles Ages, as a result of the migration of many Britons to the north-western part of France now known as Brittany, the term Britannia began to include this area. The term Great Britain derives from the Latin Britannia major (“Greater Britain”), which came to be used in opposition to Britannia minor (“Lesser Britain”) denoting present-day Brittany. Today the name Britain is often used informally to refer to the island of Great Britain or to the United Kingdom.