Ukrainians in Manchester before the Second World War – several hundred Ukrainians who, in the period from the 1890s to the outbreak of the First World War, emigrated from Western Ukraine to seek employment abroad and settled in Manchester (north-west England), where they established the first Ukrainian local community in the United Kingdom. 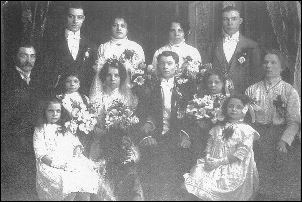 The first of the Manchester immigrants were en route to North America and reached Liverpool, from where they planned to sail across the Atlantic. At this point, however, their journey ended. Some could not afford the cost of the onward journey, while others were persuaded to stay by other East European workers already in the area. The Ukrainians settled mainly in Manchester (55 km from Liverpool) where they found employment, especially in tailoring enterprises owned by Jewish immigrants from Eastern Europe. They sent home some of their earnings and encouraged relatives and friends to join them in England. As a result, the community grew in size.

Most of the Ukrainian immigrants in Manchester were from Galicia, though among them there were also individuals from other regions, including Transcarpathia and Volhynia. In 1912 there were some 500 individuals in the community, mainly from the Peremyshliany and Zolochiv districts of the present-day Lviv Region of Ukraine. Around 200 were from the single village of Pidiarkiv in the Peremyshliany district, but by the beginning of the First World War nearly all had either emigrated to North America or returned to Galicia. Although almost all members of the community were of the Greek Catholic rite, in the absence of a Greek Catholic priest among them they attended Roman Catholic churches (see Ukrainian Catholic Church in Great Britain). During the First World War those immigrants who had arrived from Galicia or other parts of Austria-Hungary (with which the UK was at war) were deemed to be “enemy aliens”, and some were detained in internment camps, mainly on the Isle of Man (see British Isles).

In 1933 the Manchester community, including children born in the UK, numbered about 150 individuals (34 families). It founded the Samopomich society in 1919 and the Ukrainian Social Club in 1929. The community was visited by Metropolitan Andrei Sheptytskyi (1929), Bishop Mykola Charnetskyi (1932, 1937) and the Rev. Yosyf Slipyi (1935). The Rev. Louis van den Bossche (from 1932 to 1938) and Rev. Jacques Perridon (from 1938) visited Manchester periodically to celebrate mass according to the Greek Catholic rite. The community maintained links with the Diplomatic mission of the Ukrainian People’s Republic (1919-1921) and the Ukrainian Bureau (1931-1940) in London.