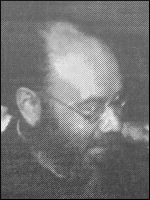 Louis Van den Bossche studied at the seminary in Saint-Trond. In 1906 he joined the Congregation of The Most Holy Redeemer (“The Redemptorists”) and in 1911 was ordained a priest in the Catholic Church. In August 1913 he was one of several Belgian Redemptorists who, at the invitation of Metropolitan Andrei Sheptytskyi, came to the monastic centre in Univ, Western Ukraine, to help lay the foundations of a Ukrainian branch of the Congregation. There he adopted the Byzantine rite of the UGCC (October 1913) and learned Ukrainian. In June 1914 he left for Canada (arrived 3 July) where he served for nearly ten years in a number of UGCC parishes. He visited various UGCC parishes in Canada and the USA where he gave week-long missions. He also played a key role in the founding of a religious periodical, The Redeemer’s Voice, and was the author of several Ukrainian-language religious publications.

In 1924 he returned to Belgium and became parish priest of the UGCC parish of St. Volodymyr in Brussels. He also became responsible for the pastoral care of Ukrainian immigrants in France, Luxembourg and Great Britain. He periodically visited Manchester, England, to hold church services for the Ukrainians living there (see Ukrainian Catholic Church in Great Britain). In 1937 he concelebrated a Byzantine-rite liturgy, led by Bishop Mykola Charnetskyi from Western Ukraine, on the site of the future Roman-Catholic Cathedral in Liverpool. In the same year he also celebrated several Byzantine-rite liturgies in London and Cambridge. He maintained contact with the Ukrainian Bureau in London and the London-based Society of St. John Chrysostom, established to promote dialogue between Eastern and Western Christianity.