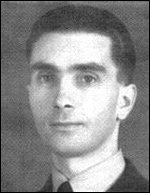 In November 1920 Oparenko left Ukraine with his family for Poland (during the retreat of the Ukrainian People’s Republic (UNR) government, in which his father was an official). Initially he lived in an internment camp in Kalisz before moving in 1924 to Czechoslovakia where he attended Ukrainian schools. In 1928 he returned to Poland and continued his education at the Ukrainian gymnasium secondary school in Kalisz, before moving in 1932 to Warsaw, where he completed his secondary education in a state gymnasium. In Warsaw he was a leading member of the Zaporizhia Ukrainian student organisation.

In August 1935 he enrolled at an infantry officer training school. From January 1937 to June 1939 he trained as a pilot at the Polish Air Force training school in Demblin (the UNR government in exile envisaged him becoming an instructor in a future Ukrainian air force). At the beginning of the Second World War he took part in the defence of Poland after the country was invaded by Germany on 1 September 1939. In mid-September he escaped with other Polish armed forces personnel to Romania, from where he was evacuated to France. After the German invasion of France of May-June 1940 he was evacuated to the United Kingdom where he continued to serve in the Polish Air Force under Royal Air Force command (see Ukrainians in the Polish Armed Forces under British command). For most of the remainder of the war he served as a flying instructor. In 1947 he was demobilised from the Polish Air Force. Until 1949 he continued to serve in the Royal Air Force, rising to the rank of flight lieutenant. After studying law at Cambridge University he joined a division of the BBC, working as a linguist. In 1955 he moved to a department of the Foreign Office where he worked until his retirement.