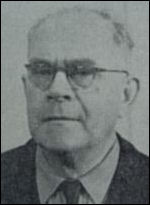 Olijnyczenko attended a gymnasium secondary school in Zhytomyr and graduated from the Kyiv Polytechnical Institute, Faculty of Electrical Engineering. During the First World War he served as a non-commissioned officer in the Imperial Russian Army. In 1918-1920, during the Ukrainian Revolution, he was head of one of the regions of Ukraine’s railway network (the South-Western Railway). For some time in the 1920s he was a lecturer at the Volhynia Industrial College. In 1929 he was detained for 15 days on suspicion of belonging to the “Union for the Liberation of Ukraine” (“Spilka vyzvolennia Ukrainy”). After his arrest he was forced to move to Kramatorsk (Donetsk oblast) where he worked as a research engineer in a machine-building plant. In 1933 he began to work at the Dnipropetrovsk Institute of Transport Engineering, where he was head of the departments of Electric Railways and Electrical Technology, and, from 1935, acting head of the Faculty of Electrical Mechanics. In 1937 he was removed from these positions after a false accusation that he disrupted the commissioning of the Institute’s railway rolling stock laboratory. During the Second World War, after the German army occupied Dnipropetrovsk (now the city of Dnipro) in August 1941, he served as head of the Dnipropetrovsk oblast administration, set up with the help of an expeditionary group of members of the Organisation of Ukrainian Nationalists (Banderivtsi), or OUN(B), which had arrived in the city. Не initiated the formation of Dnipropetrovsk Ukrainian State University, which functioned from September 1941 to December 1942, and became head of the Institute of Transport Engineering.

In 1943 he was deported by the German authorities to Linz in Austria, where he was initially a factory worker and subsequently an employee of the railway administration. At the end of the war he moved to Germany. He was a leading member of the League of Ukrainian Political Prisoners, becoming its vice-president (1946-1948) and president (1948-1951). He also worked for an organisation in Munich which published material on Ukrainian national martyrology (Naukovo-Doslidnyi Instytut Ukrainskoi Martyrolohii) and the Ukrainian Medical and Charitable Aid Organisation, and was professor of electrical technology in the engineering faculty of the Ukrainian Technical and Husbandry Institute in Regensburg (1945-51).

In the early 1950s he settled in the United Kingdom. He worked at the Head Office of the Association of Ukrainians in Great Britain (AUGB) until 1955, and subsequently at Ukrainian Publishers Limited. He was head of the AUGB Tribunal (Mediation Committee) (1956-1961), a member of the Relief Board for Ukrainian Students in Great Britain, and a member of the UK leadership of the OUN(B).