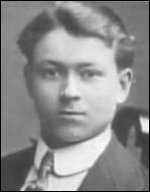 Lesniowsky came to the United Kingdom in about 1909 and settled in Manchester, where he became the leading organiser of the local Ukrainian community. In 1919 he helped to found the Samopomich society and became its chairman. In 1929 he established a Ukrainian Social Club in Manchester and for many years was its chairman or secretary. In 1945 he became a member of the initial executive of the Ukrainian Relief Committee in Great Britain and subsequently became its chairman.