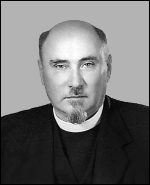 Hubarshevsky grew up in the village of Palanka (now Zaozerne, Haisyn raion) where his father served as a priest, and subsequently attended the pre-seminary school in Tulchyn. In 1921 he moved to Kyiv, where he studied in the Department of Ethnography at the Kyiv Archaeological Institute, and subsequently became a teacher on the state-run programme of Ukrainisation courses. In 1930, as an external candidate at the Department of History and Philology of the Kyiv Institute of Popular Education, he took examinations qualifying him to teach language and literature in secondary and higher educational establishments. Subsequently, until 1941, he worked at the Institute of Linguistics of the Ukrainian Academy of Sciences (from 1936 – the Academy of Sciences of the Ukrainian SSR), becoming head of the Dialectology Section in 1932. From 1936 (or 1937) he also held various posts in the Faculty of Languages and Literatures at the Kyiv Pedagogical Institute. In 1939 he defended his PhD dissertation on ‘Taras Shevchenko and the contemporary Ukrainian literary language’.

Following the German invasion of the Soviet Union in 1941 Hubarshevsky initially remained in Kyiv. In December of that year he was ordained as a priest of the Autonomous Church of Ukraine and in early 1942 became rector of the parish in Chopovychi, Zhytomyr oblast. He subsequently joined the Ukrainian Autocephalous Orthodox Church (UAOC). In October 1943 he left for the West and after the end of the Second World War reached the British Zone of Occupation of Germany. In 1945-1948 he was rector of the UAOC parish in the displaced persons camp at Heidenau, near Hamburg, and also head of the Ukrainian language and literature department of the camp-based university.

In August 1947, while still in Germany, the Rev. Hubarshevsky was appointed head of the church committee of the Ukrainian Autocephalous Orthodox Church in Great Britain (UAOC-GB). On 3 March 1948 he moved to the UK and assumed leadership of the committee. In October of that year he became head of the UAOC-GB General Church Council which replaced the committee. He also became rector of the London parish of the UAOC-GB, head of the Brotherhood of St. Michael the Archangel, and editor of its bulletin Bratskyi Lystok.

In November 1950 he was dismissed from these positions by Metropolitan Polikarp Sikorskyi, head of the UAOC in the Diaspora, and removed from the clergy of the UAOC-GB. At this time he began to organise a movement which culminated, at the end of December 1950, in the formation of the Ukrainian Autocephalous Orthodox Church (Conciliar) in Great Britain (UAOCC-GB). In October 1951, together with the UAOCC-GB, he was accepted into the jurisdiction of Archbishop Bohdan Shpylka, head of the Ukrainian Orthodox Church of America, which was under the canonical authority of the Ecumenical Patriarch of Constantinople. From 1951 to 1961 the Rev. Hubarshevsky was head of the UAOCC-GB’s General Council and Executive Council. He also founded and edited the Church’s bulletin Khrest i Tryzub (The Cross and the Trident). In addition to his church activities, from 1952 to 1961 he taught Russian at a British military language school, for which he also co-authored a guide to Russian grammar.

On 30 March 1961 the Rev. Hubarshevsky emigrated to the USA where he became a leading ideologue of the UAOC (Conciliar). He served in parishes in New York, Trenton (New Jersey) and Philadelphia, and became deputy head of the Church’s General Council and Executive Council. He also taught Ukrainian, Russian and ancient Ukrainian literature in a number of higher education establishments in New York, and was a language editor at the Ukrainian section of Radio Liberty.