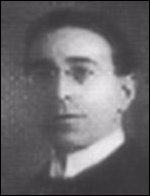 Raffalovich’s mother was French, and his father was from a family which had moved to France from Odesa, Ukraine. In 1906 he came to the UK where he settled and subsequently became a naturalised British citizen. Initially he published several novels and short stories, and later began to write on current affairs, focusing on international relations.

In May 1912 in London he met the political émigré Vladimir Stepankowsky through whom he became interested in Ukrainian affairs. He began to write on the Ukrainian national movement (sometimes under the pseudonym Bedwin Sands) in the Saturday Review, British Review, The Commentator, The Outlook and The New Age and to deliver public lectures. He argued that an independent Ukraine would contribute to political stability in Europe, and became the most active British proponent of the Ukrainian cause before the First World War. In March 1913 he was one of the founders of the Ukraine Committee, of which he became the Honorary Secretary, and which, from the summer of 1913, he ran practically single-handedly. He also maintained contacts with members of the Ukrainian Information Committee in Lviv, and in May 1914 he visited Lviv where he witnessed events held to mark the centenary of the birth of Taras Shevchenko.

Towards the end of 1913 he wrote a 71-page book which was published the following year under his Sands pseudonym as The Ukraine. Reprint of a lecture on Ukrainian history and present-day political problems (London, 1914). Among his other significant publications was a translation of an essay by Mykhailo Hrushevsky, published as The Historical Evolution of the Ukrainian Problem (London, 1915).

After the outbreak of the First World War Raffalovich continued to publish articles on Ukraine, mainly in The New Age, with which Paul Selver, the Slavist and translator of Taras Shevchenko's poetry, was closely involved. In 1915 he was suspected of sympathising with the Central Powers with which the UK was at war. Fearing the possibility of arrest, he ceased his Ukrainian activities in Britain and in November of that year emigrated to the USA where he attempted, without success, to organise the publication of a Ukrainian periodical. For a while his interest in Ukrainian affairs continued and resulted in a large collection of newspaper cuttings relating to Ukraine, mainly from the Boston press (Cuttings concerning Ukraine, November 1917 – January 1920, 8 volumes, Houghton Library, Harvard University, Cambridge, Mass.). Later he gained a doctorate from the Ukrainian Free University in Prague and taught Slavonic and French history at a number of American universities.