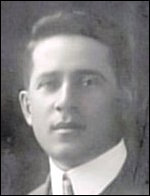 In 1903 Makohin emigrated to the USA and from 1905 to 1921 served in the United States Marine Corps. In 1917 he became a naturalised US citizen. Some sources suggest that during the First World War, and later, he may have worked for the US intelligence services. In 1920 he married Susan Fallon who, according to most sources, was the daughter of a wealthy US admiral. He purported to be the sole surviving descendant of Kyrylo Rozumovskyi, the last hetman of the Ukrainian Cossack state, although there is no evidence to substantiate this.

During the 1920s Makohin made frequent visits to various countries in Europe, including Austria, Poland, Romania and Czechoslovakia, where he established contacts with Ukrainian political leaders, mainly supporters of the governments in exile of the Ukrainian People’s Republic and the Western Ukrainian People’s Republic. In the course of a visit to Lviv in October 1930 he met members of the Ukrainian National Democratic Alliance (UNDO) and gathered information relating to the Pacification campaign being conducted by the Polish authorities against Ukrainians in Galicia. When his activities were discovered by the authorities he was detained and expelled from Poland.

Returning to the USA, Makohin began to seek support for a plan to launch an information and lobbying campaign in Europe. His aim was to involve all émigré Ukrainian organisations and he was willing to provide the necessary finance. He gained support, in particular, from the Ukrainian Self-Reliance League of Canada (USRL, Soiuz Ukraintsiv Samostiinykiv u Kanadi). In March 1931 Makohin established the Ukrainian Bureau in London, which was to serve as the main centre of the European campaign, and subsequently founded similar bodies in other European capitals including Geneva and Prague. During the 1930s he made frequent visits to London in connection with the work of the Bureau.

In this period Makohin also travelled extensively between the USA, Canada and other European countries, keeping abreast of international political developments. He maintained contacts with Ukrainian organisations and political figures in various countries and gave material support to Ukrainian causes, notably the Museum of the Ukrainian Liberation Struggle in Prague. His activities, both in the UK and elsewhere, were monitored by the British Security Service. At the outbreak of the Second World War Makohin was living in Alassio, Italy, from where he returned to the USA in 1940 or 1941. After his return to the USA he ceased to be actively involved in Ukrainian affairs.