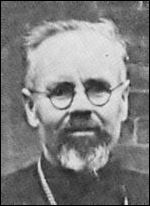 After graduating from a teachers’ seminary and a teacher training college, he worked as a teacher in Volhynia. In addition to his teaching he was involved in directing parish church choirs. Later he became an inspector of schools. In the early years after the Second World War he lived in Germany where, in 1947, he was ordained as a priest of the UAOC. For a time he was responsible for the pastoral care of UAOC members in the displaced persons camp at Seedorf near Hamburg.