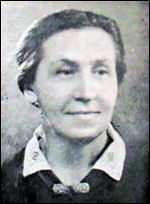 After graduating from the Zolotonosha girls’ gymnasium secondary school, Maria Lukianenko enrolled in a private women’s medical college in Kyiv. In 1915, during the First World War, she was forced to interrupt her fourth year studies when she was called up for military service as a nurse. She worked in this capacity with refugees and homeless children until 1921. She then enrolled in the Faculty of History and Philosophy at the Kyiv Institute of People's Education where she specialised in history. During this period, together with other students, she also ran literacy classes in Kyiv. In 1928 she graduated from the Institute and subsequently worked as a teacher in secondary schools and technical colleges, mainly in Vinnytsia and neighbouring villages. Prevented from teaching history (on the grounds that she was not a member of the Communist party), she taught mainly mathematics, as well as physics and German. In December 1943, during the Second World War, she left Vinnytsia. After living for a time in Lviv, and then in the Lemko region and Austria, towards the end of the war she crossed into Germany. After the war she taught mathematics in a displaced persons camp near Munich, and later in a camp-based school of commerce in Mittenwald. She compiled a collection of Ukrainian folk tales recollected by older women in the camps from various parts of Ukraine, and had part of the collection published (Neu-Ulm, 1947). (Four tales from this collection, translated into English by Marie Halun-Bloch, are included in Ukrainian Folk Tales, published in 1964 in London and New York.)

In 1948 Maria Lukianenko moved to the United Kingdom and settled in north-west England. She lived initially in Preston and then in Rochdale, where she worked in a cotton mill until 1957. In 1949 she initiated the founding of the Rochdale branch of the Association of Ukrainian Women in Great Britain (AUW) and was its first head for three years. In 1950 she assisted in the founding of the AUW branch in neighbouring Bury. At the AUW annual general meeting in 1950 she was elected deputy head of the Association but subsequently resigned on the grounds of ill health. From June 1950 to 1952, with the assistance of the Rev. Justyn Hirniak and Anton Lukianenko, she ran, at her home, the first Ukrainian Saturday pre-school nursery in the UK. After it was transferred to the local branch centre of the Association of Ukrainians in Great Britain (AUGB) she became an advisor to the nursery. In 1954-55 she was the first teacher of the Ukrainian supplementary school at the Rochdale AUGB branch. Together with Anton Lukianenko she ran training courses for Ukrainian pre-school nursery teachers (held in 1954 in Bury, in 1957 in Rochdale), and she was the author of support materials for nursery education. In addition to her work in children’s education, in 1952-53 she gave courses, in Rochdale, on the history of Ukraine for adult students of the Distance Learning Institute (founded by the Ukrainian Free University). In 1952 and 1953 she was elected to the AUGB Governing Council. She was the author of a retelling, in Ukrainian, of ancient Greek myths, which was published in instalments during 1960-61 in the Vyzvolnyi Shliakh (Liberation Path) journal under the title Starohretski mity.