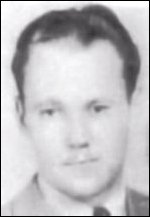 Initially attended school in Hillcrest. In 1932 his father sent him to continue his education in Polish-ruled Western Ukraine, where he attended schools in Stanislaviv (now Ivano-Frankivsk), Sniatyn and Kolomyia. During this time he joined the youth wing of the Organisation of Ukrainian Nationalists (OUN). In 1940 he enrolled at the University of Lviv and studied veterinary medicine for several months. In 1941 he returned to Canada, via Siberia and Japan, and enrolled at Toronto University. At first he studied veterinary medicine, before transferring to political science and economics. In 1943-1944 he was national president of the Ukrainian National Youth Federation of Canada. From the autumn of 1944 he worked for the Canadian government’s Department of National War Services, monitoring Slavonic-language newspapers published in Canada.

In May 1945 he came to the UK to work for the Control Commission for Germany (British Element). From autumn 1945 he worked at the Central Ukrainian Relief Bureau (CURB) in London, initially as general secretary, and, from May to October 1946, as director. In December 1945 he was appointed UK representative of the General Secretariat for Foreign Affairs of the Ukrainian Supreme Liberation Council. In 1946 he helped to set up the Ukrainian Information Service, as an adjunct to CURB, and was the leading figure behind its activities. He also helped to organise the Association of Ukrainian Soldiers in the Polish Armed Forces which, in January 1946, became the Association of Ukrainians in Great Britain.

In December 1946 he returned to Canada, with a mandate from the leadership of the Organisation of Ukrainian Nationalists (Banderivtsi), or OUN(B), to be its liaison officer there. He founded the Homin Ukrainy (Ukrainian Echo), a Ukrainian-language newspaper covering events in Ukraine, which was first published in December 1948. In 1949, together with other OUN(B) members, he initiated the formation of the Canadian League for the Liberation of Ukraine. In 1952 he left the OUN(B). He obtained a Bachelor of Arts degree from the University of Toronto (1952) and a Bachelor of Laws degree from the Osgoode Hall Law School, York University, Toronto (1958). In 1958 he established a law practice in Toronto, and in 1968 was appointed Queen’s Counsel. He served as president of the Ukrainian Canadian Professional and Business Federation (1971-73) and of the Canadian Foundation for Ukrainian Studies (1975-1976).