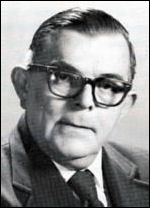 Dmochowski attended the Ukrainian gymnasium secondary school for boys in Peremyshl, and in 1928-33 he studied at the Faculty of Medicine of the University of Lviv, where he gained a bachelor’s degree. In 1934-35 he worked as a general practitioner at the Lviv university clinic. He subsequently obtained a grant from the J. Potocki Foundation for Scientific Investigation of Cancer and Tuberculosis and moved to Warsaw where, from 1935 to 1938, he was a research assistant in the cancer laboratory of the Polish State Institute of Hygiene, Department of Bacteriology and Experimental Medicine. In 1937 he gained a Doctor of Medicine degree from Warsaw University.

Obtaining a one-year travelling fellowship from the Potocki Foundation, in 1938 he came to the United Kingdom where, until 1946, he conducted research at the Imperial Cancer Research Fund (now Cancer Research UK). During this period he published five papers in the British Medical Journal, the British Journal of Experimental Pathology, the British Journal of Cancer and the Journal of Pathology and Bacteriology. In 1946 he moved to Leeds, where he worked as a researcher and lecturer in the Department of Experimental Pathology and Cancer Research at the School of Medicine, University of Leeds. He also lectured in microbiology. In 1949 he obtained a second doctorate from Leeds University, and in 1950 was promoted to the position of reader at the university. In this period he published a further 24 papers in The Lancet (1947), Nature (1947, 1948, 1950, 1951) and other journals (Advances in Cancer Research, British Medical Journal, Journal of the National Cancer Institute, Acta – Unio Internationalis Contra Cancrum, Annals of the New York Academy of Sciences). In 1951 he was invited to give a series of lectures on oncology at a number of universities in the USA. In 1953-54 he was a visiting associate professor of microbiology at the Columbia University College of Physicians and Surgeons in New York. From 1949 to 1955 he was an adviser to the United Nations Relief & Rehabilitation Administration (UNRRA). He was a member of the Royal Society of Medicine, the Royal Society of Tropical Medicine and Hygiene, the British Society of General Microbiology, and the Pathological Society of Great Britain and Ireland.

Deciding to settle in the USA, in 1954 Dmochowski moved from New York to Houston, where in 1954-55 he was a professor of anatomy at the Baylor University College of Medicine, and a consultant at the M.D. Anderson Hospital & Tumor Institute (now University of Texas M.D. Anderson Cancer Center). He continued to work at the Anderson Center, where he was chief of the Section of Virology and Electron Microscopy (1955–65), acting head of the newly-established Department of Virology (1965–66), and, from 1966, professor and head of the Department of Virology. From 1955 he was also professor of experimental pathology at the University of Texas Postgraduate School of Medicine, and, from 1965, professor of virology at the new University of Texas Graduate School of Biomedical Sciences. Additionally, he was a clinical professor at the Baylor University College of Medicine (from 1955), and a distinguished lecturer at the Medical College of Georgia at Augusta (1966). After retiring in 1974 he continued with his academic and research work at the Anderson Center. His main academic interests included virology, experimental oncology, immunology and serology of tumours, endocrinology, and electron microscopy in cancer diagnosis. He was the author or co-author of over 450 articles and papers, as well as chapters in several books. He was at the forefront of research into the role of viruses in oncology, one of the first researchers to report the viral origins of various malignant tumours (1953), and a pioneer in the application of electron microscopy in oncovirology. He also discovered viruses which cause leucosis in rodents and demonstrated the presence of such viruses in human beings.

Dmochowski was a member of the Ukrainian Physicians’ Society in Lviv and the Ukrainian Medical Association of North America, and (from 1959) a full member of the Shevchenko Scientific Society in the US. He was also a member of the American Association for Cancer Research, the Electron Microscopy Society of America, the Society for Experimental Biology and Medicine, the American Society for Microbiology, the New York Academy of Sciences, the Leukemia Society of America (National Board of Trustees, 1966- ; National Medical and Scientific Advisory Board, 1966-1970), and the Pan American Cancer Cytology Society. He was an honorary member of the Chilean Society of Cancerology.