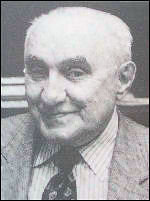 In 1928 Semchyshyn graduated from a gymnasium secondary school in Zolochiv, and in 1928-33 he studied at the University of Lviv (initially Ukrainian Studies, later Slavonic Studies). In 1933 he was awarded a Masters degree in Slavonic philology (topic: “The study of seventeenth century Cossack surnames”). After two years of teaching practice, in 1935 he gained a qualification to teach in gymnasiums and teacher training colleges. In 1936-38 he taught Ukrainian at the Ukrainska Akademichna Himnaziia in Lviv. In 1939 he completed and submitted a doctoral dissertation, but the outbreak of the Second World War prevented him from obtaining his doctorate. He was a member of the Ukrainian Society of Bibliophiles, founded in 1936 in Lviv, and the Society’s librarian. From 1937 he was a member of the Shevchenko Scientific Society in Lviv and secretary of its Linguistics Committee.

During the 1939-41 Soviet occupation of Galicia he worked as a lecturer in Ukrainian at the University of Lviv (autumn 1939), senior lecturer in Ukrainian language and literature at the Lviv Pedagogy Institute (December 1939 – June 1941) and a research associate in the Department of Linguistics of the Lviv branch of the Ukrainian SSR Academy of Sciences (March 1940 – June 1941). During the German occupation he worked in the editorial office of the Lviv radio station (July – September 1941), and then as editor of the Ukrainian section of the Telepress news agency (September 1941 – January 1943), education officer of the Ukrainian District Committee for outer Lviv (January 1943 – June 1944), and editor of the Lvivski Visti daily newspaper (June-July 1944). In July 1944 he left for Austria where he worked in the cultural department of the Ukrainian Relief Committee in Vienna (1944-45). In 1945-46 he taught Ukrainian in the DP camp-based Ukrainian gymnasium in Salzburg.

In mid-1946 he came to the United Kingdom. For one year he taught Polish language and literature in a school established by the British government for young immigrants from Poland. From August 1947 to June 1949 he worked in the editorial office of the Ukrainska Dumka newspaper (published by the Association of Ukrainians in Great Britain, or AUGB) and until 18 March 1949 was the newspaper’s editor-in-chief. In 1948-49 he was a member of the AUGB Governing Council, and for a time headed the culture and education department at the AUGB Head Office. From the autumn of 1948 he was secretary, and also press and information officer, of the UK Representation of the Ukrainian National Council's Executive Body. From 20 November 1954 to 2 April 1955 he was a member of the Ukrainian National Council praesidium, representing the Ukrainian National Democratic Alliance (revived in 1947 in Western Europe). From June 1947 he was the official representative for Great Britain of the Shevchenko Scientific Society. In August 1948, at the inaugural meeting of the British section of the Association of Ukrainian Journalists in Exile (which later became the Society of Ukrainian Writers and Journalists in Great Britain) he was elected vice-chairman. In 1948-49 he edited Nasha Tserkva, a periodical published by the Ukrainian Catholic Church in Great Britain. At the first two congresses of the International Federation of Free Journalists of Central and Eastern Europe and Baltic and Balkan Countries, in 1948 (Paris) and 1949 (London), he was elected one of its vice-chairmen. From March 1952 he was a member of the Shevchenko Scientific Society in Europe. In 1954-55, while still living in the UK, he worked as an associate of the Munich-based Institute for the Study of the USSR.

In the autumn of 1955 Semchyshyn emigrated to Chicago, USA, where he co-founded the weekly Ukrainske zhyttia and was its first editor (1955-61). From 1959 he taught Russian at Wright Junior College and Elmhurst College in Chicago. From 1961 until his retirement in 1978 he worked at Chicago Teachers College, which became Northeastern Illinois University in 1971. He taught Polish and Russian languages and literatures and German studies, initially as assistant professor and later as professor. In 1964 he founded a programme of higher educational courses for teachers of Ukrainian supplementary schools in the USA. Within the programme, which he led until 1976, he taught Ukrainian language and literature, and pedagogy. In 1973 he established a committee for the promotion of Ukrainian studies in the state of Illinois and became the first lecturer in Ukrainian subjects which were introduced, through the efforts of the committee, into the curriculum of the University of Illinois at Chicago Circle. In 1978-82 he gave lectures on Ukrainian culture and pedagogy at the Chicago centre of the then Rome-based Ukrainian Catholic University. He was a Full Member of the Shevchenko Scientific Society in the US (from 1980) and head of its Chicago branch (1981-93).

Semchyshyn was a member of a sub-committee of the Educational Coordinating Council of the World Congress of Free Ukrainians (now the Ukrainian World Congress), the Ukrainian American Association of University Professors, and the Association of Ukrainian Journalists in America. He published numerous articles on educational and cultural topics in Ukrainian periodicals in pre-war Galicia (from 1932) and in the diaspora (Germany, USA), and was the author of Tysiacha rokiv ukrainskoi kultury (A Thousand Years of Ukrainian Culture, 1985) and Z knyhy Leva (memoirs of pre-war Lviv, 1998).