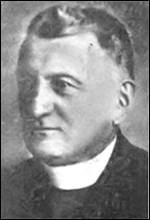 After graduating from the Ukrainska Akademichna Himnaziia secondary school (gymnasium) in Lviv in 1884, Lopatynsky studied at the University of Lviv and at the Graeco-Catholic seminary in Lviv. In December 1888 he was ordained a priest and from then until 1891 he served as assistant priest in a parish in Rozdil. In the following years he taught religion at primary and secondary schools in Lviv, Zolochiv and Ternopil. From 1921 he served in the Church of the Dormition in Lviv, initially as assistant priest, and then as the parish administrator. From 1922 he was head of the St Paul Clerical Society in Lviv (closed down in 1925). In 1927 he was made an honorary canon of the Lviv metropolitanate of the UGCC.

He was a leading member of the Christian Social Party, the Ukrainian National Democratic Party and subsequently the Ukrainian National Democratic Alliance. From 1910 to 1939 he was a board member and chief administrator of the Dilo Publishing House in Lviv. He was also a long-standing member of the Lviv municipal council and a board member of the Narodna Torhovlia co-operative society in Lviv. Early in 1940 he left Lviv for Kraków where, from June 1941, he was a member of the supervisory board of the Ukrainske Vydavnytstvo Ukrainian publishing house. In 1944-1945 he served as a priest in a labour camp in Vienna. After the end of the Second World War he crossed into Germany. There he was assigned responsibility for the pastoral care of Graeco-Catholic Ukrainians (mainly displaced persons) in the American Zone of Occupation, his residence being in Munich.

As a result of efforts by Bishop Ivan Buchko, the apostolic visitor for Ukrainian Graeco-Catholics in Western Europe, in December 1948 the Rev. Lopatynsky moved to the United Kingdom to work as a priest in the Ukrainian Catholic Church in Great Britain (UCC-GB). He served as an assistant priest of the London parish, and in August 1949 became dean of the UCC-GB, responsible for liaison between the clergy and the then vicar general of Bishop Buchko, the Rev. Volodymyr Malanczuk. In May 1950 he emigrated to the USA to live with his family.