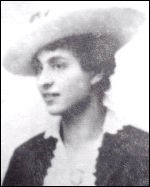 Myroslava Dublanycia graduated from teacher training college in Prague. For a time she lived in Kolomyia where she was active in the Moloda Hromada youth organisation and was involved in events relating to the November 1918 Ukrainian uprising in eastern Galicia. From the mid-1920s she lived in Peremyshl where she played an active role in the Union of Ukrainian Women and other local Ukrainian organisations. In 1934 she took part, as a delegate from Peremyshl, in the Congress of Ukrainian Women held in Stanyslaviv (now Ivano-Frankivsk). In the summer of 1944, as the Red Army was advancing from the east, she left Peremyshl with her family. After staying briefly in Poznań, Vienna and Linz she crossed into Germany. Following the end of the Second World War she lived in a displaced persons camp and was active in the post-war Association of Ukrainian Women in Germany.

In April 1953 she emigrated to Canada and settled in Toronto, where she became active in the Ukrainian Catholic Women’s League of Canada.